My dad's time at King's

My dad worked for King’s of Stevenage until 1971 as a Foreman Fitter Erector and I remember him installing the conveyor at Fords of Halewood when the plant was being built. He worked at numerous other sites around the country plus sites in Northern Ireland. He also worked at Spadeadam which was a rocket launching site and he installed sliding doors where the rockets were kept. Apart from the memories of him all that is left is the scale rule which I have kept and is shown in the photos. 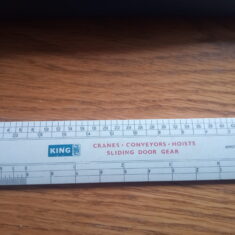