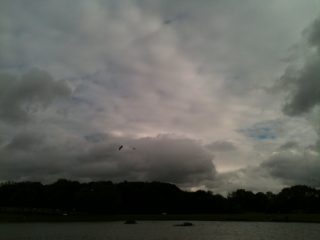 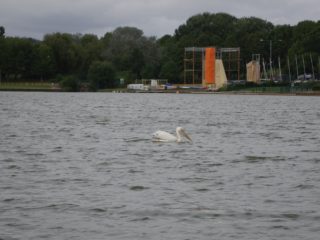 White Pelican settled on the Main Lake
A. Ford

Fairlands Valley Lakes being the largest expanse of open water in North Hertfordshire has, since its construction in 1972, attracted some unusual and interesting Birds such as Red-throated and Black-throated Divers (1979 and 1993 respectively),  Pink-footed Goose (2010), Little Auk (1983) and, on 30th August 2012, a White Pelican.

The summer of 2012 was generally wet and unsettled. The 30th August was no exception and was a day of heavy rain showers. Cycling home past the “Lakes” in the late afternoon under a “leaden” and stormy sky, the thought crossed my mind that this was the sort of weather in which unusual birds sometimes turn up, when a large bird appeared out of the gloom dwarfing the Gulls that were mobbing it. As this large white bird started to lose height and began circling the Main Sailing Lake  I  realised that it was a White Pelican.

White Pelicans have never been recorded in the wild in Britain, they are rare and local migrants around the eastern Mediterranean and Black Sea, and winter in north east Africa. So this was obviously an “escaped” bird. From the ring on its left leg it was identified by another Birdwatcher the following day as having escaped from Blackbrooke Zoological Gardens, Staffordshire, and was one of two that had escaped two weeks earlier.

Despite an unsuccessful attempt by keepers from Blackbrooke Zoo to re-capture it, the Pelican stayed at Fairlands Valley Lakes until 5th September providing great interest to users of the Park. It was finally caught by a Fisherman at Sawbridgeworth on 9th September and returned to the Zoo.