You are here: Home>Topics>Stevenage Sculptures and Public Art>Joyride, by Franta Belsky 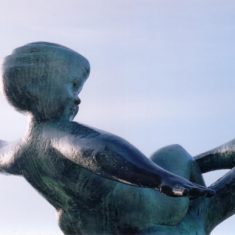 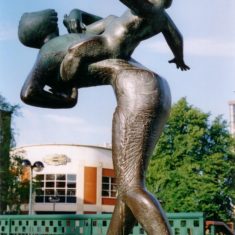 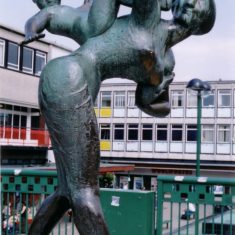 A Grade II listed sculpture unveiled in 1958 in the Town Square, Joyride has become the symbol for Stevenage and the new towns.

Franta Belsky was born in Czechoslovakia, but came with his family to England in 1938 to escape the German occupation, and began his studies at art college in London, returning as a teacher after the war.  His work includes bronze busts of several members of the royal family, a larger-than-lifesize statue of Lord Mountbatten in Horseguards Parade, and a monument in Prague to the Czech pilots in the R.A.F..  He was a founder member of the Royal Society of Portrait Sculptors, and a Fellow of the Royal Society of British Sculptors.

In each of his works, he placed an empty Guinness bottle, the day’s newspaper, a sixpence, and a note stating that he was the artist.