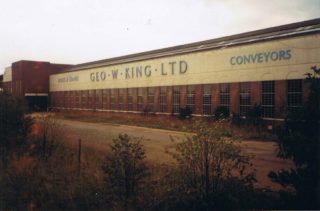 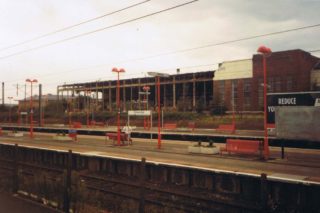 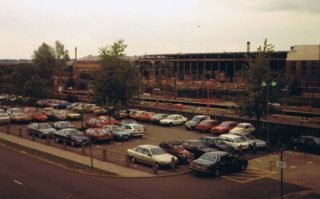 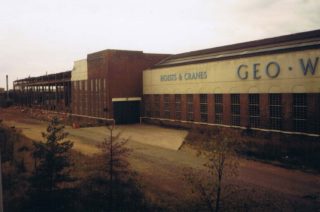 Geo W.King Ltd, then in Hitchin, built their new factory in Argyle Way Stevenage. This was all just prior to World War II. For this ultra modern factory rail tracks were included with potential access to the main line railway (the site of the factory is now Stevenage LeisurePark but the Stevenage station was not in its current location but at the bottom of Julian’s Road in the OldTown). Around 1947 they commenced the final move from their Hitchin factory which was located local to Hitchin Station in Walsworth Road. It was a gradual process and eventually vacated the Hitchin factory site completely around 1957.

The Stevenage factory was a large building housing a number of bays each equipped with overhead travelling gantries each with electric hoists. These bays were numbered from ‘A’ bay through to ‘F’ or ‘G’ bay. Historically searchlights were constructed/assembled in ‘B’ bay as part of the war effort. These were discontinued around 1957.

In ‘C’ bay numerous cranes were constructed from metal parts made in-house and electrically tubed and wired, then painted and tested before being dispatched to the customer.

‘D’ bay was primarily small part stores and dispatch for electric hoists. There was a production line for these hoists in ‘E’ bay culminating in Electrical Department and Test/Paint area prior to dispatch.

‘G’ and ‘H’ bays included furnaces for heat treatment of metal castings. The laboratory for metal testing, etc was also in this area.

The famous apprentice shop, where after attempting to shape a piece of round mild steel bar into a hexagon with a fitted separate cube, apprentices enlarged their experience throughout the rest of the factory including the drawing office.

‘Z’ bay, not mentioned earlier, which was located on the far side of the site housed carpentry, canvas and agricultural departments together with the garage for company vehicle maintenance.

The Admin offices covered two floors, the lower where the giant computer was located which in its day was state of the art. Very sophisticated. Also in this area were the rest of the admin services, i.e. buying department, personnel, accounts, and the outside staff control.

Upstairs in this building was the huge drawing office with approximately 100 drawing boards making up the electrical and mechanical design and development departments for cranes, hoists, conveyors (both floor to overhead conveyors) and specialised solutions for simple storage and fully automated equipment.

The whole site covered several acres with the main entrance off Argyle Way (a notice board can still be seen in shrubbery on the left hand side of the entrance off Argyle Way to the LeisurePark) and staff social/sport activities took place on the football pitch, bowling green and in the large canteen. At one time there were probably over 1500 employees.