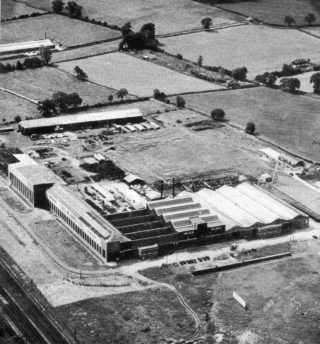 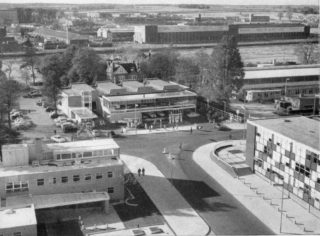 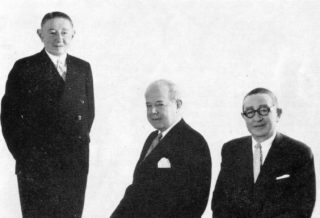 From the 1940’s to the late 1960’s Geo. W. King Ltd was one of Stevenage’s major employers. The iconic Argyle Works beside the Railway (opposite the present Railway Station) was a notable landmark. The Company produced cranes, hoists, pulleys, mechanical handling gear, sliding door gear and agricultural equipment, exporting to Australia, North America, South Africa, Russia and Mongolia.

Geo. W. King Ltd was founded in 1914 at Stratford in East London by Mr George W. King an American born in Hartford, Connecticut in 1862. He had arrived in England in 1891 having worked his way across the Atlantic on a Cattle Boat with the intention of proceeding to Australia. By the end of 1914 he had also taken over the firm of Messrs. G.H. Innes and Co who had works at Hitchin, (the Station Ironworks), and formed another company called Innes Son and King Ltd. In the late 1920’s his businesses transferred solely to Hitchin.

When it became evident that the works at Hitchin were becoming overcrowded an additional site was found at Stevenage. In 1938 work began building a factory on this site. By the end of 1940 certain departments had moved to Stevenage, but the Second World War delayed a major move from Hitchin and any further building on the site.

During the Second World War both the Hitchin and Stevenage Factories were involved in War work producing components for Tanks and Searchlights and Mechanical Handling Equipment for factories assembling Aircraft and Vehicles.

After the War extensions were built to the Stevenage Factory,  and when the building of the Office Block was completed in 1953 the remainder of the works personnel and office staff moved from Hitchin to Stevenage and, the Hitchin Works were sold.

During the 1950’s and 1960’s King supplied nearly all the Car Manufacturers in Britain  with Mechanical Handling equipment namely, Austin, Morris, Rootes, Jaguar, Standard Triumph, Vauxhall and Ford. They also supplied equipment to Peugeot, Simea and Citroen in France, Alfa Romeo in Italy, Volvo in Sweden and complete handling systems for two tyre plants in Russia and one in Romania.

Its own sports field

The site had its own Sports Field and the Company had an active Sports and Social Club. During the 1950’s and early 1960’s the Company also held an annual Show and open day. The Sports Field was sold around 1980 and was developed as the Showrooms and Offices of Fulton Close.

In October 1967 Geo. W. King Ltd joined the Tube Investment Group and, in November 1973 became a member of the Camford Engineering Group. Work ceased at the Factory in July 1990 and, in September 1990 the buildings were demolished and the 50 year old landmark disappeared. The site is now the Stevenage Leisure Park.